The history of the New Apostolic Church in Nigeria

The beginning of the NAC in Nigeria ↑

In August 1968 – in the time of the terrible Biafra war – the young Suisse brother Peter Gfeller comes to Nigeria, sent by a Swiss Trading Company. At that time, he was the only new apostolic all over Nigeria. For his spiritual well-being he was served from Germany by regular “soul care letters” as well as by the new apostolic magazine “Our Family” which he studied intensively. 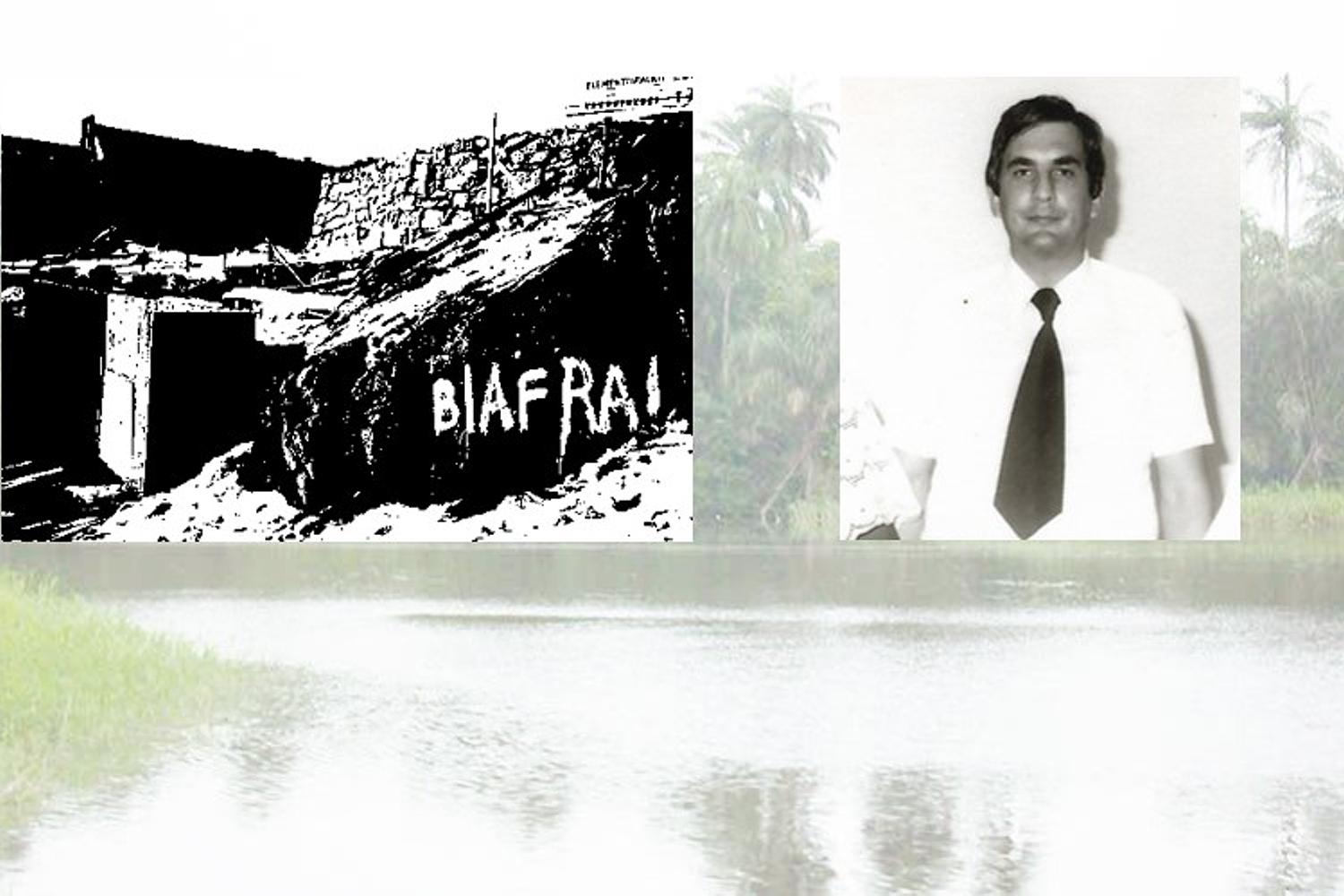 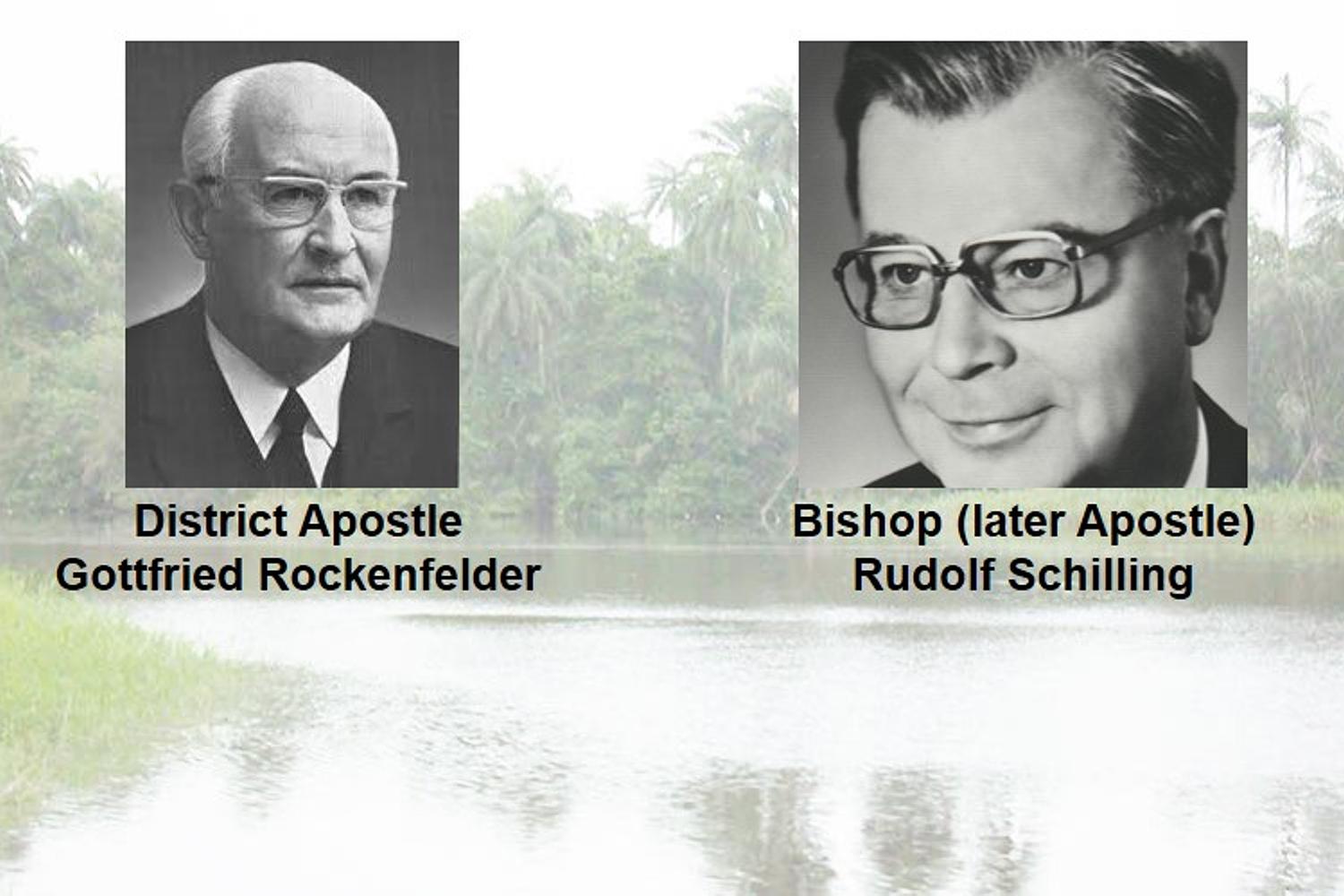 In October 1973, Bishop Rudolf Schilling (NAC Hessen/Germany) meets Peter Gfeller for a short first personal meeting in the Transit Area of Lagos International Airport. On behalf of District Apostle Gottfried Rockenfelder, he is in charge of the emerging New Apostolic Church in Ghana at the time and now also commissioned to support the foundation of the New Apostolic Church in Nigeria.

In February 1974, Bishop Rudolf Schilling conducts the first new apostolic Divine Service in Nigeria in presence of about 50 guests; Peter Gfeller is commissioned to organize regular meetings with the guests in order to prepare further spiritual visits from overseas. 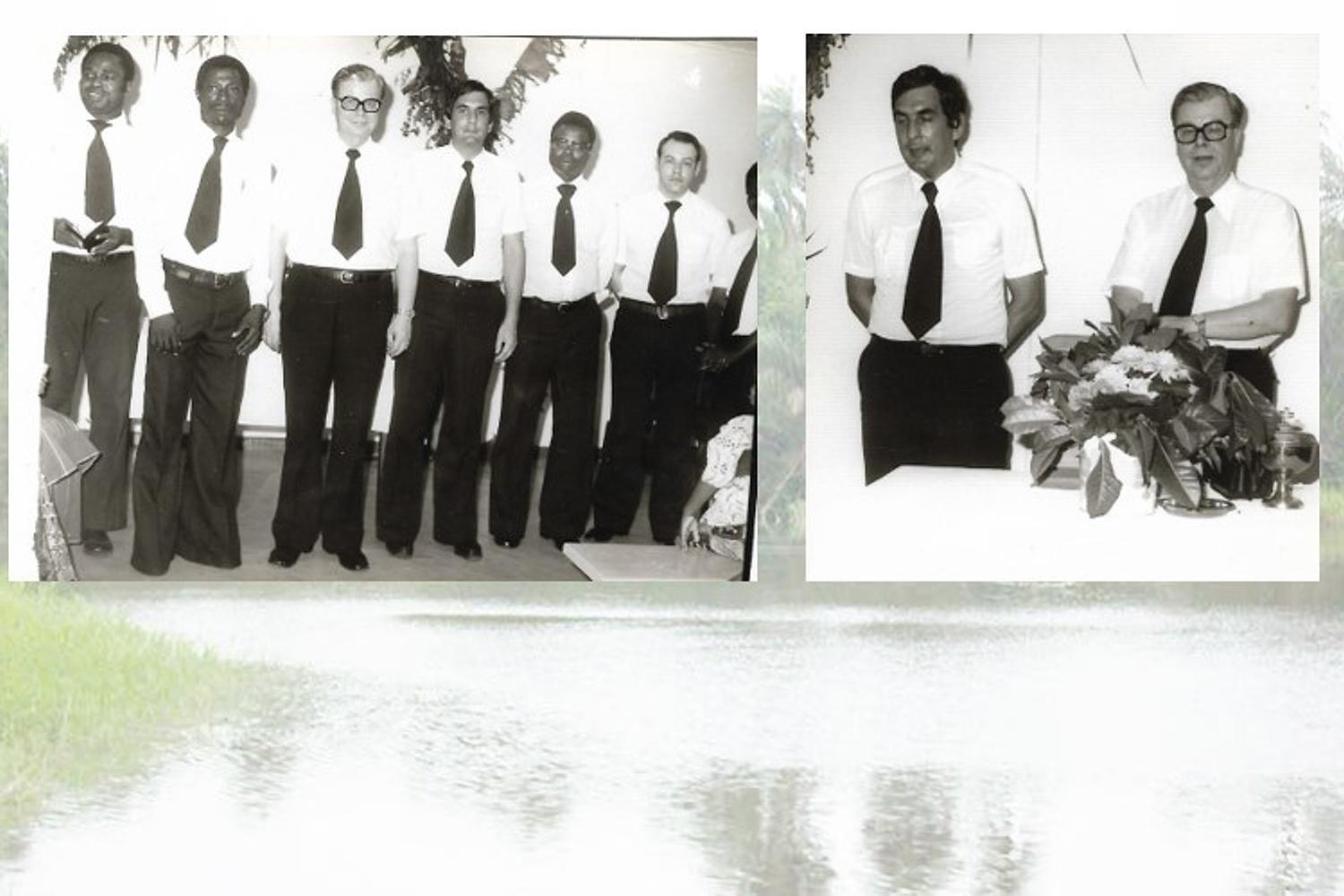 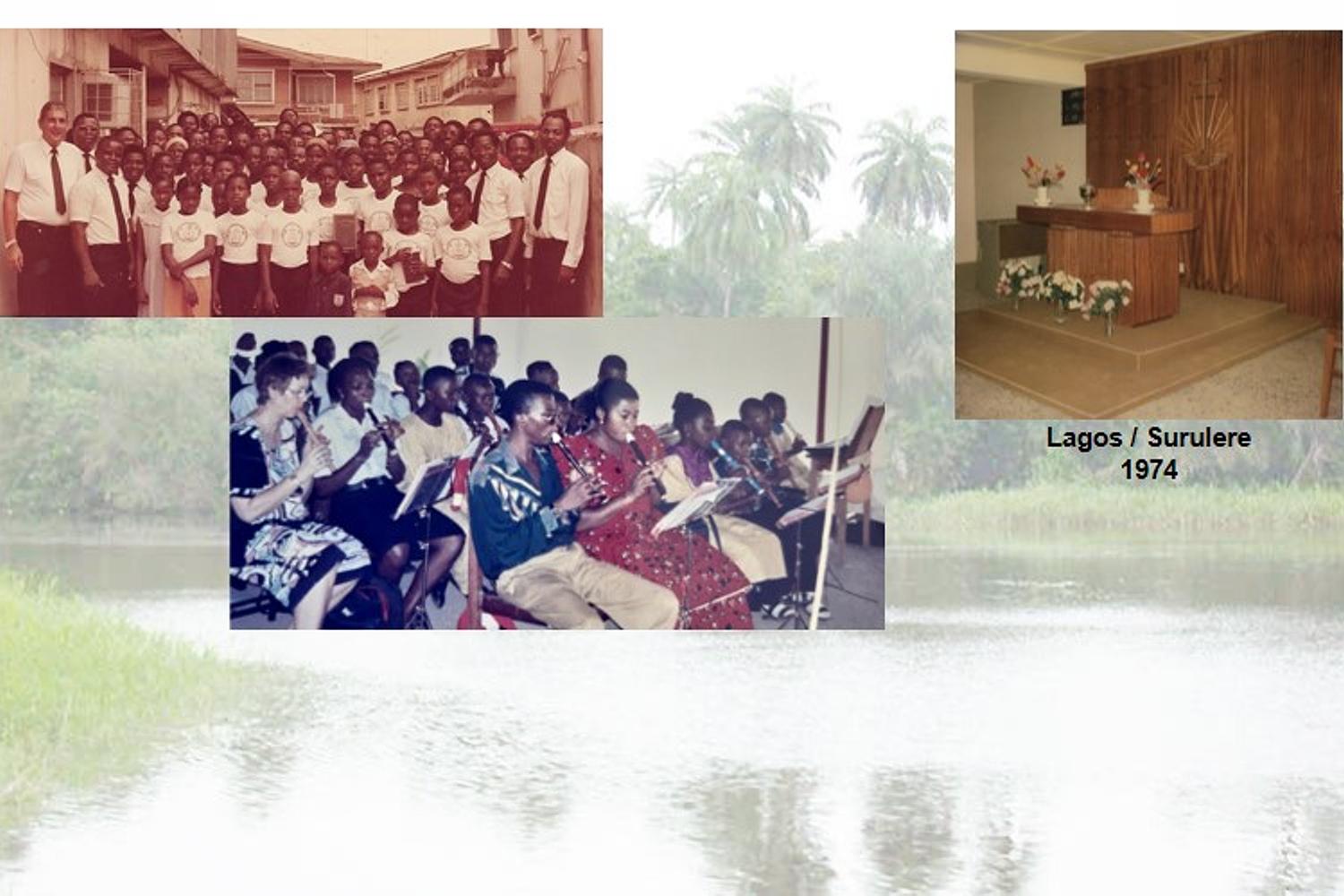 First visit of District Apostle Gottfried Rockenfelder to Lagos. On Sunday, 19th May 1974, 33 souls are sealed, Peter Gfeller ordained as Priest and four brothers as a Deacon.

In late 1974, Priest Felix Omeh who had signed an eight-year contract with the government of Guyana was asked by District Apostle M. Kraus to terminate the contract and take the New Apostolic Church to Nigeria. Immediately after his return to Nigeria he met Priest Peter Gfeller in Lagos on 12th January, 1975.

Due to his job as an engineer with the Federal Government of Nigeria, Priest Omeh was sent to Jos in the northern part of Nigeria. On Sunday, 22nd January, 1975, he conducted there the first divine service in his hotel room. Later the testimony was brought from Jos to other areas in the North as well as to the Eastern part of Nigeria.

During a Bible conference in the USA, Okuyak Uwah from Uyoh gets in contact with the NAC. Soon after his return to Nigeria, new apostolic Church ministers from North America come to the Eastern part of Nigeria, commissioned by District Apostle Michael Kraus. On Sunday, August 31, 1975, Okyuak Uwah is sealed and ordained Priest by Apostle Erwin Wagner (Canada) in Uyo. 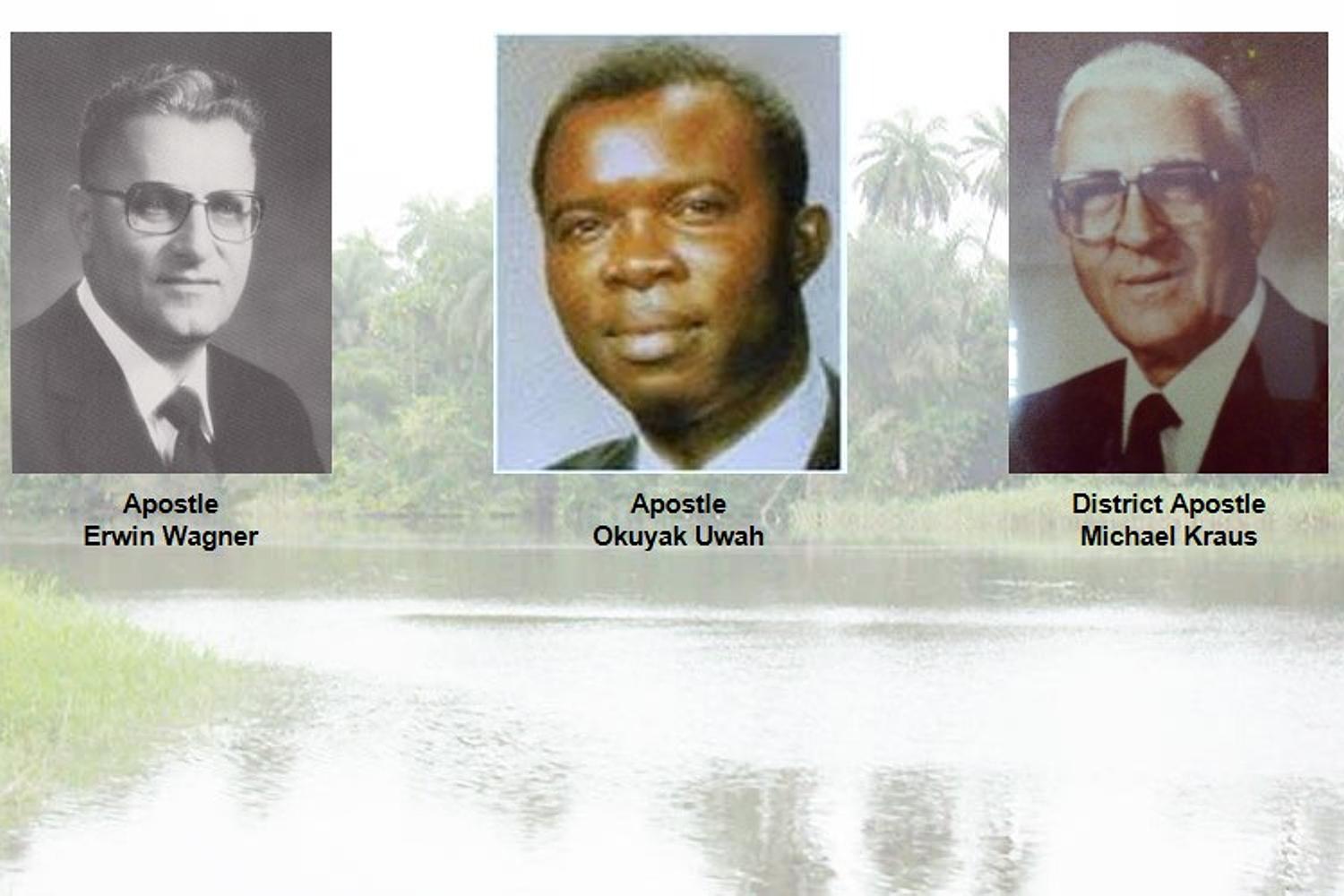 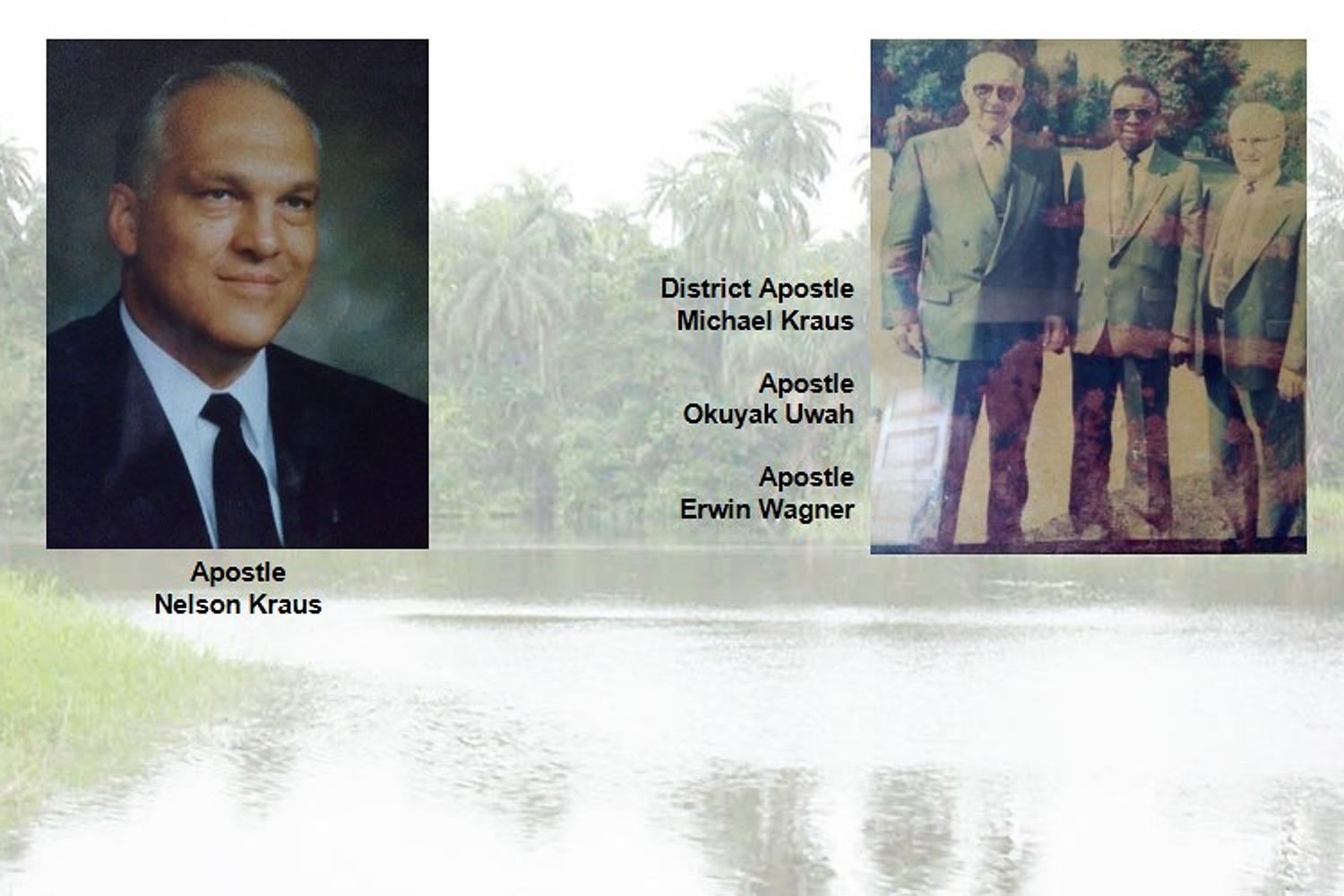 The decade of growth ↑

Within this decade the Church grows, blessed by God’s grace and the enthusiasm of the believers. Many new congregations are founded, a vivid congregation life fostered, also for children and youth as well as for members gifted for music – and Christian love towards the neighbour is practiced in many ways … 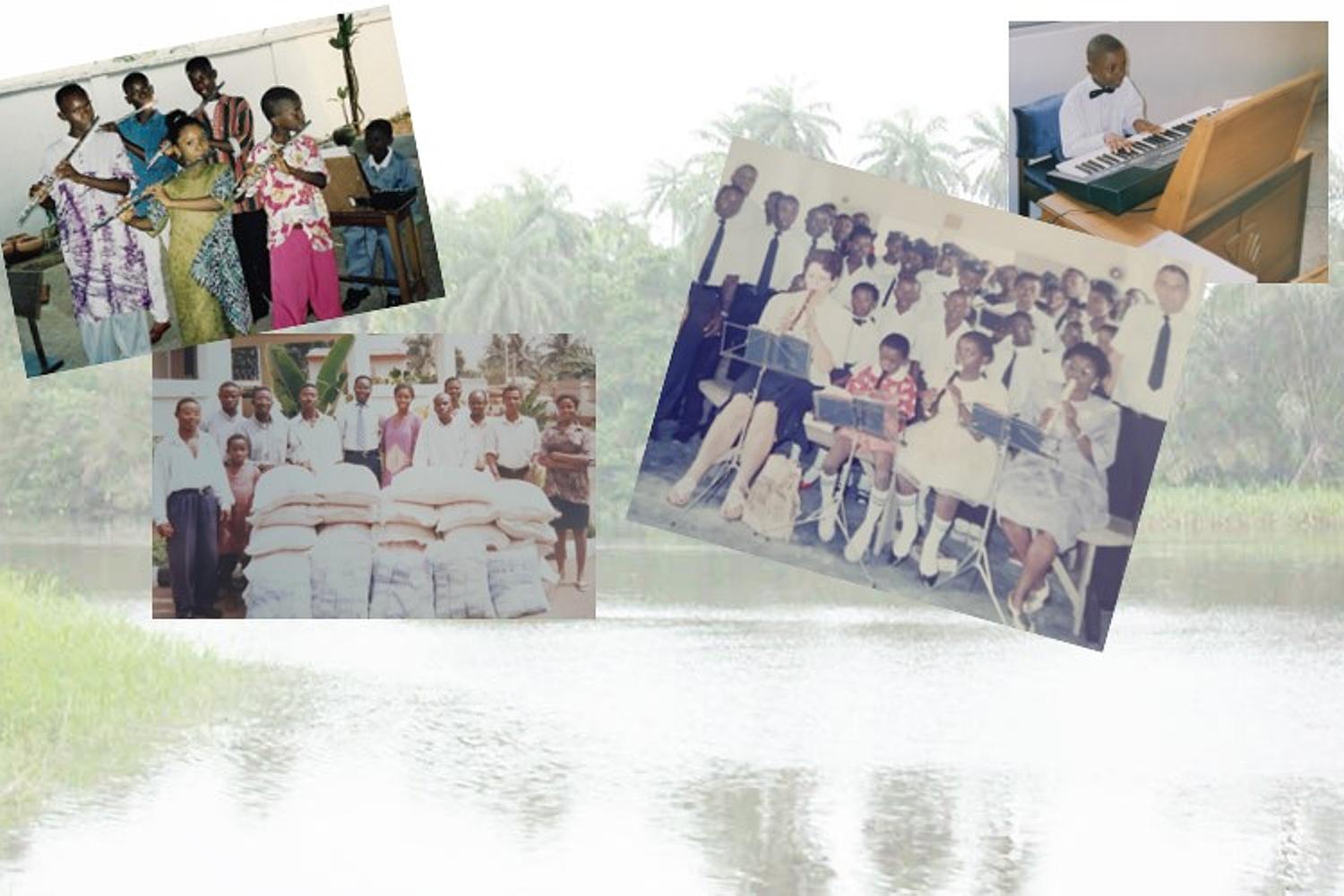 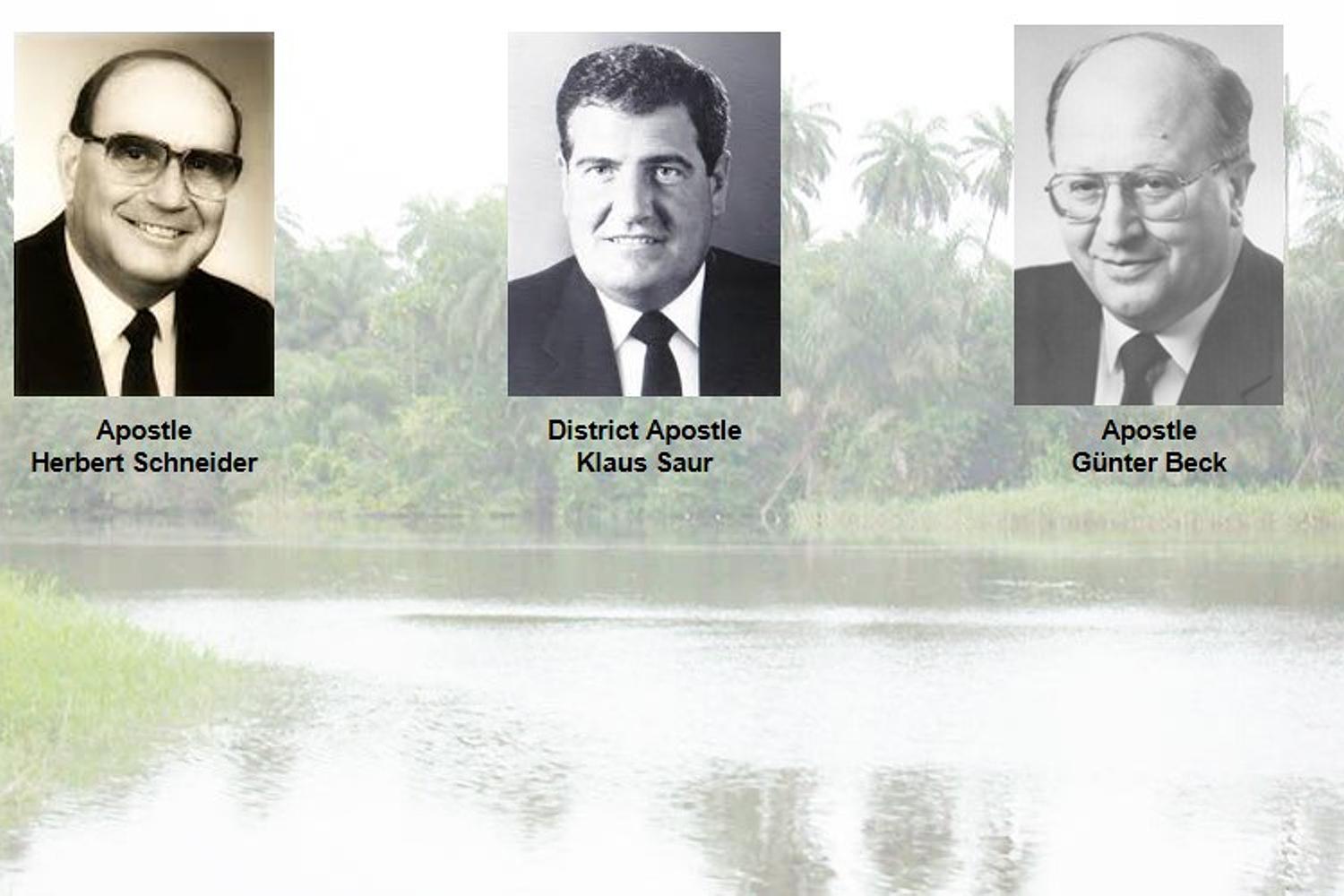 For further promotion of the Church development, additional local apostles are ordained. 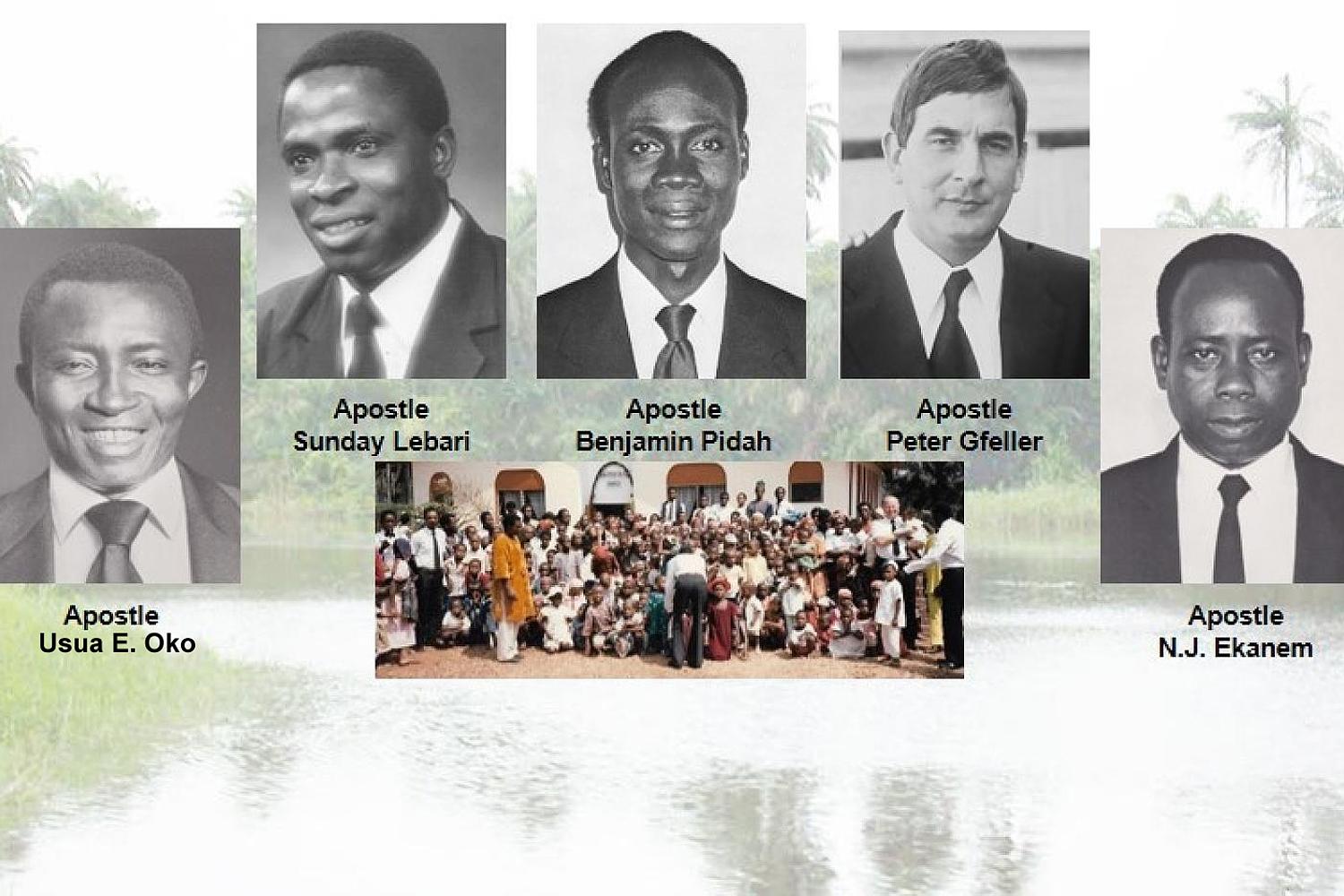 The decades of further expansion ↑

Three visits of Chief Apostle Richard Fehr, the leader of the New Apostolic Church International, mark this decade. His first visit is to Lagos in March 1992. 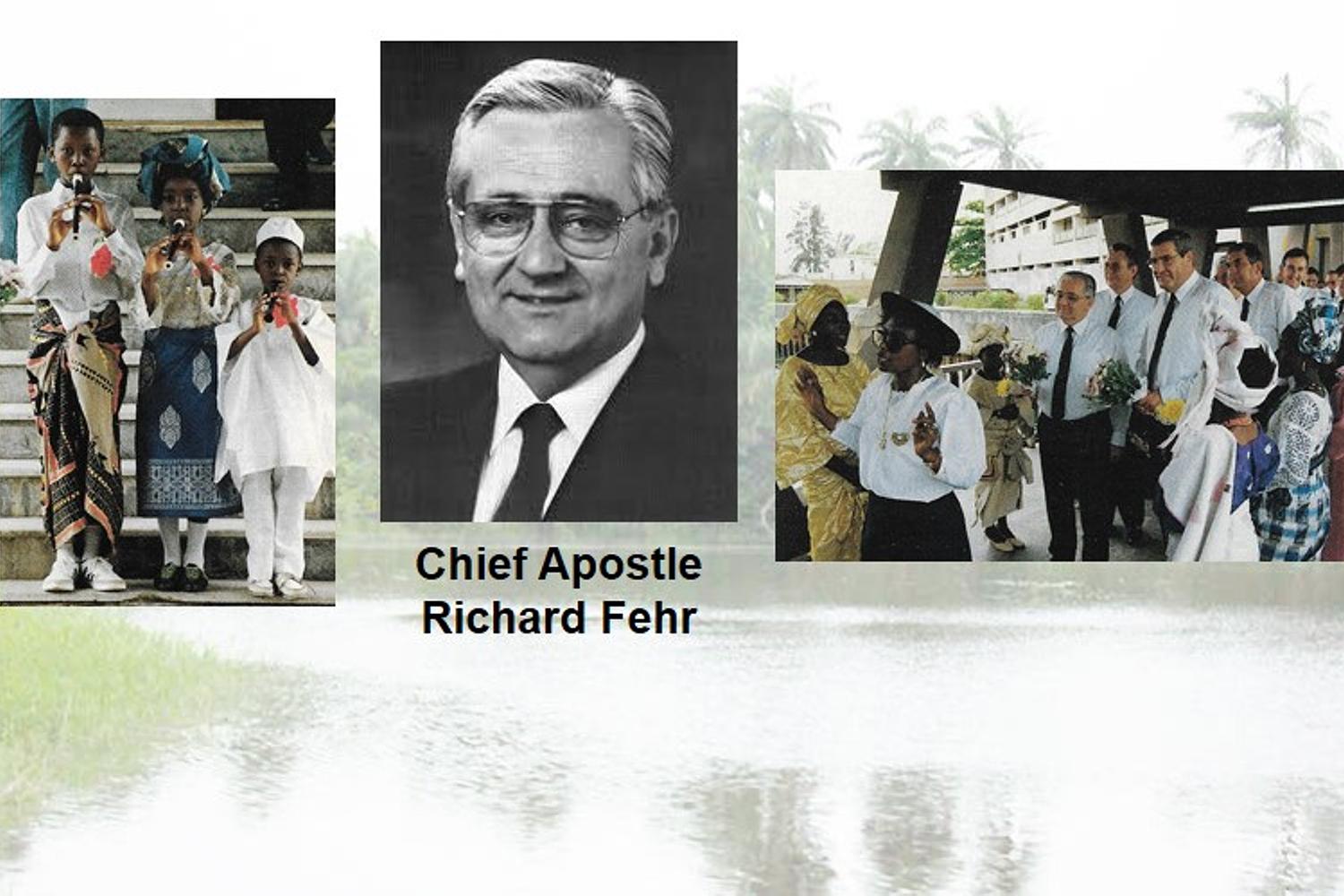 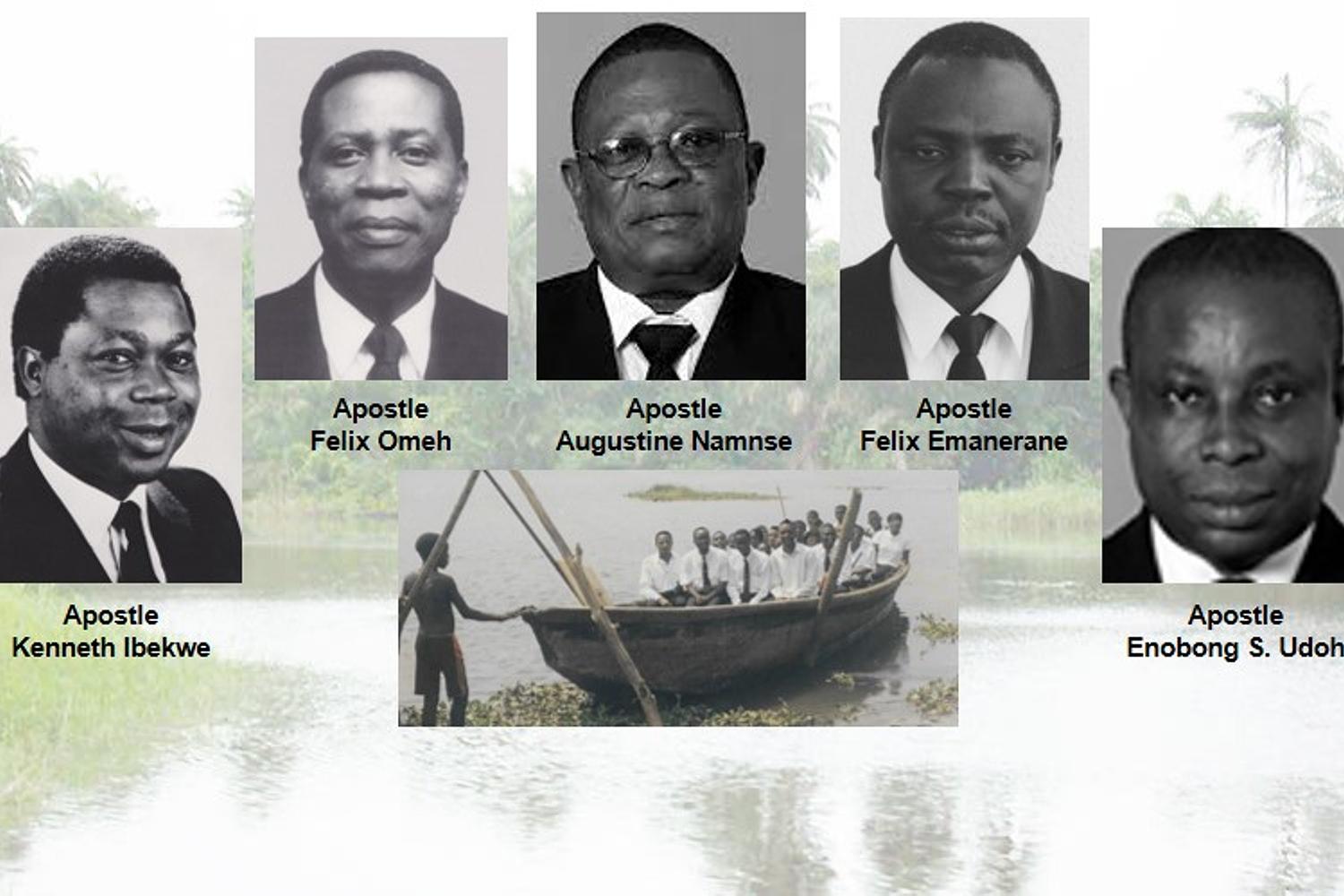 More apostles are ordained again in order to foster the work.

"Sweet fruits" of blessing and joy were a visible sign of the spreading of the Apostle’s teaching. 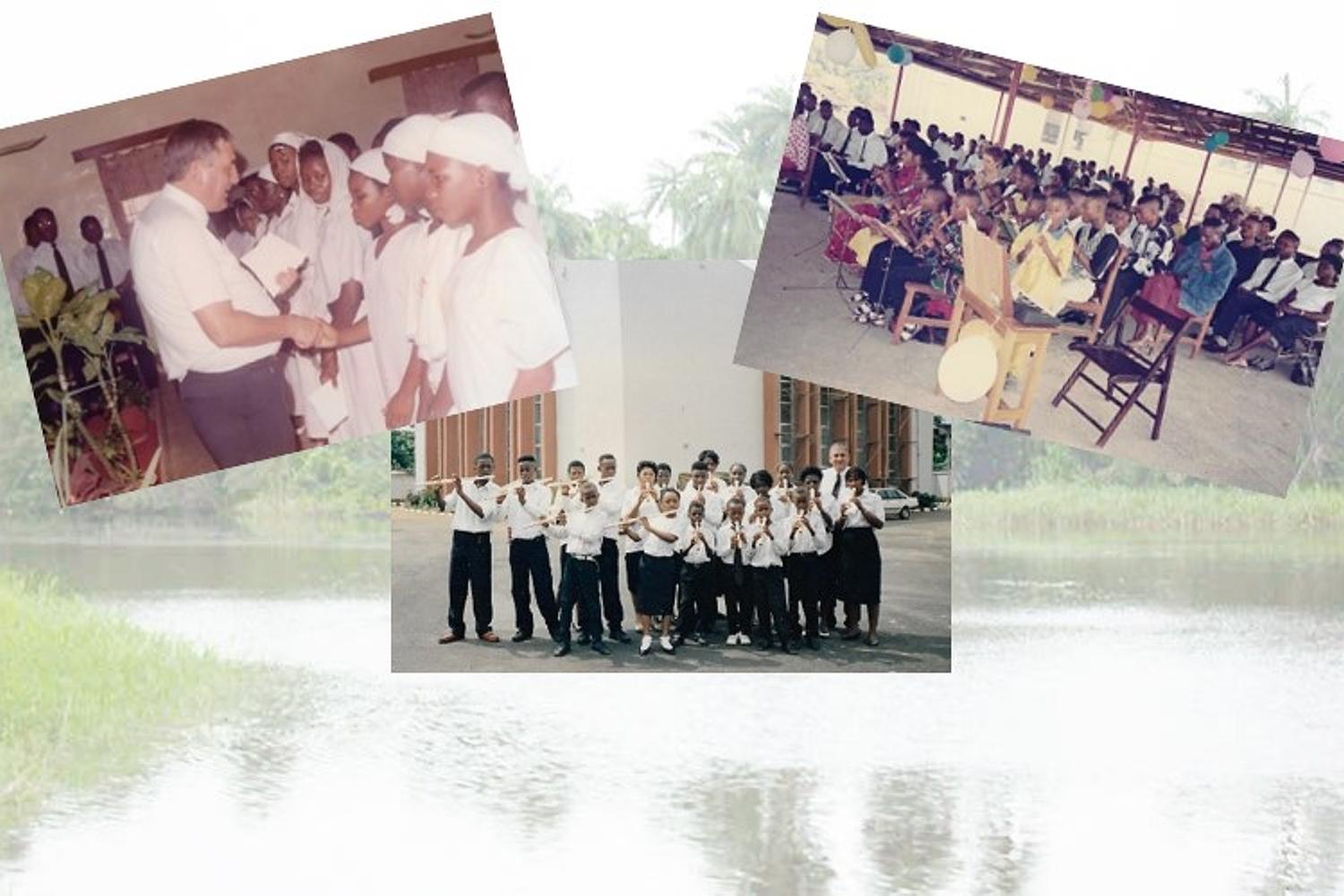 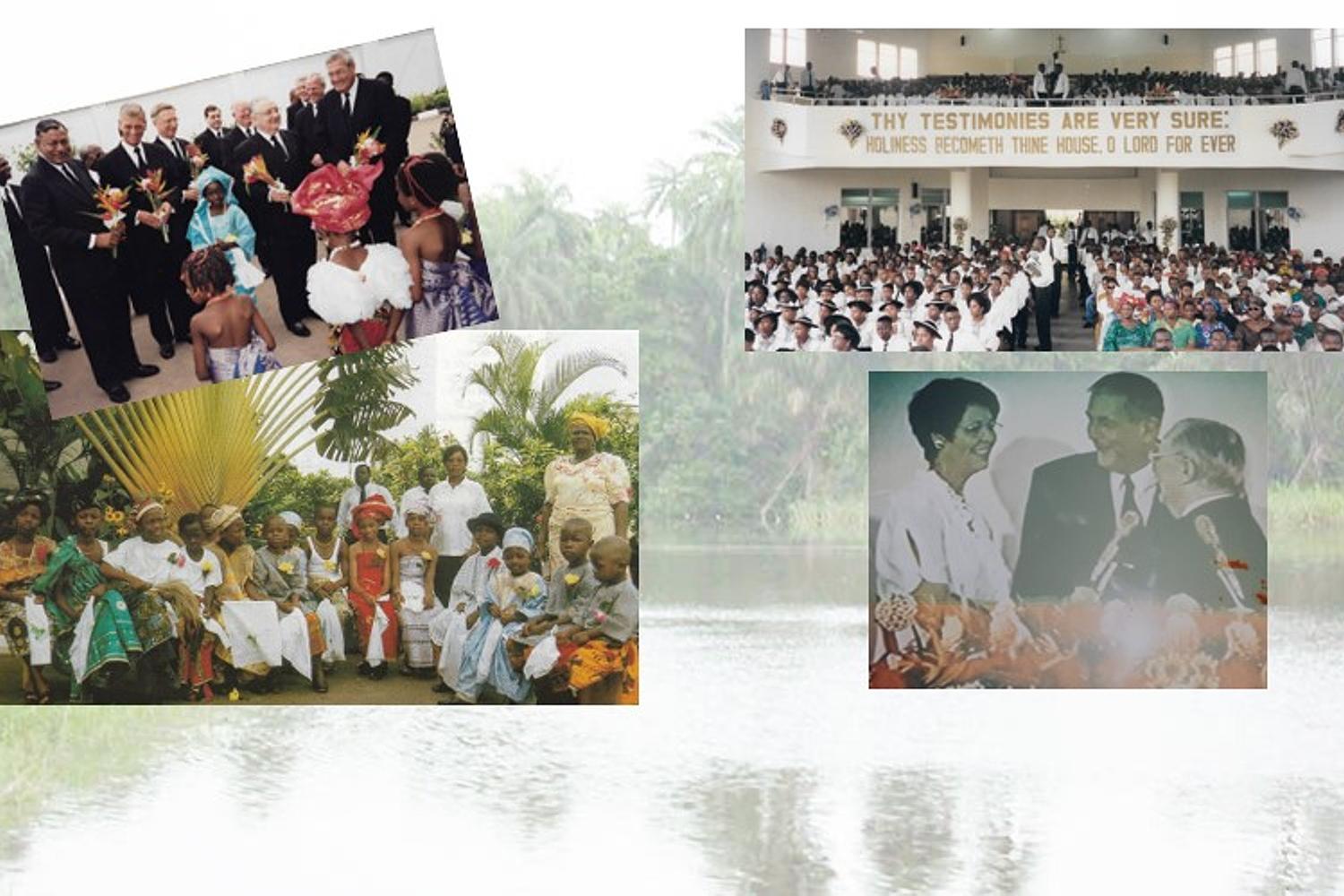 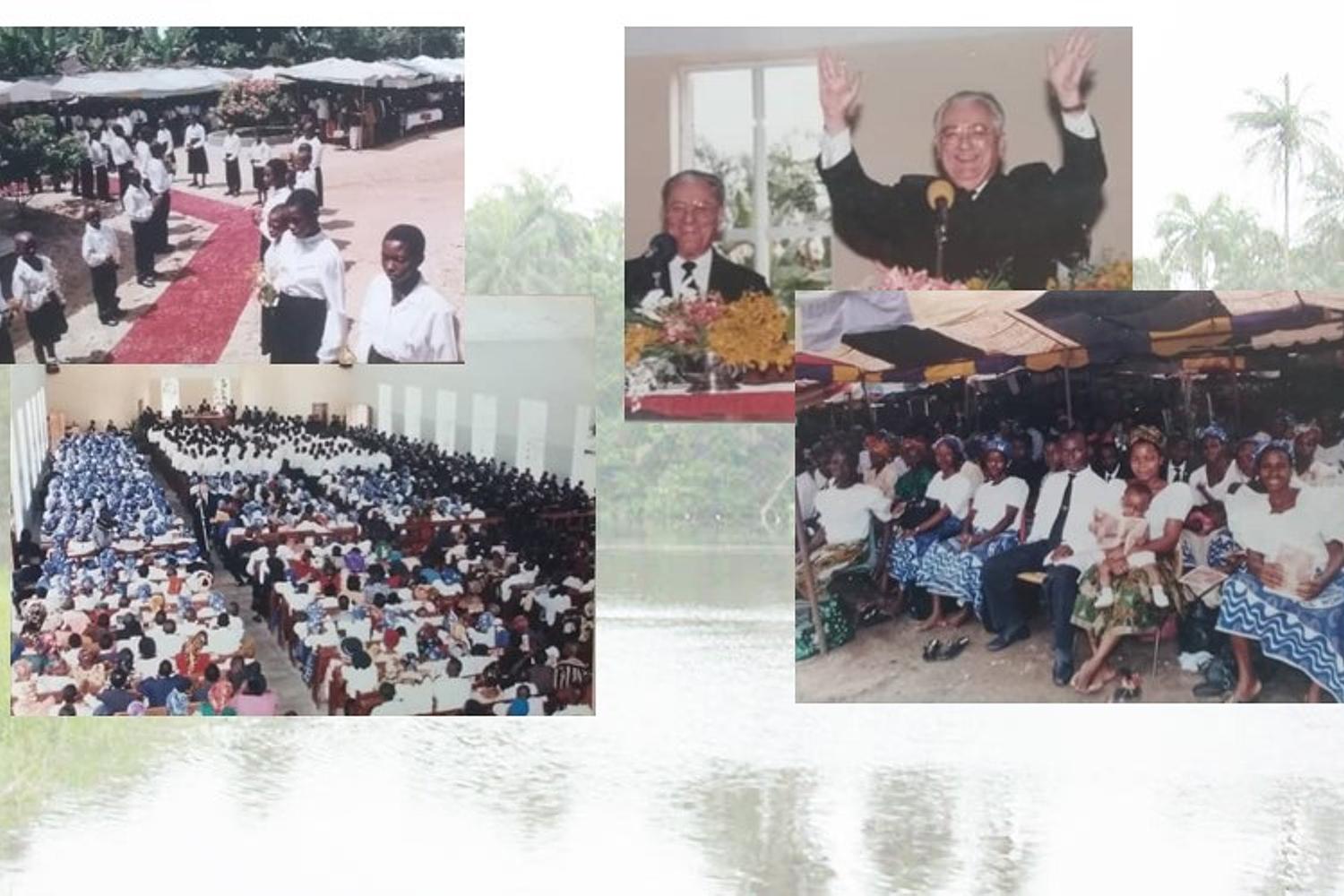 The decade of changes ↑

In December 1999, Apostle Günter Beck retires. Apostle Volker Kühnle takes over the task as Lead Apostle for Nigeria. The former separated parts of NAC in Nigeria, cared for by Canada and Southern Germany, are merged together. Again further apostles were ordained for help. 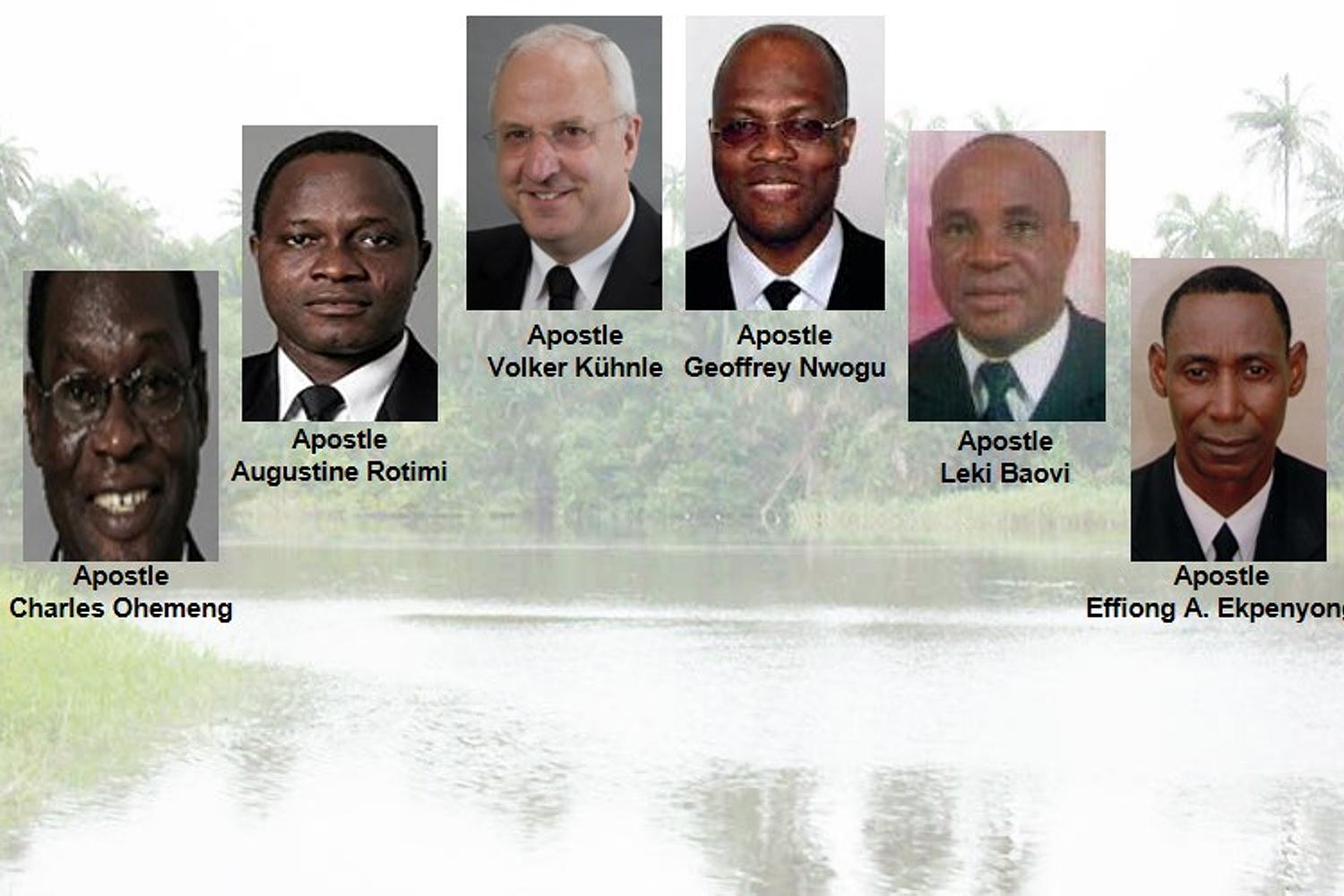 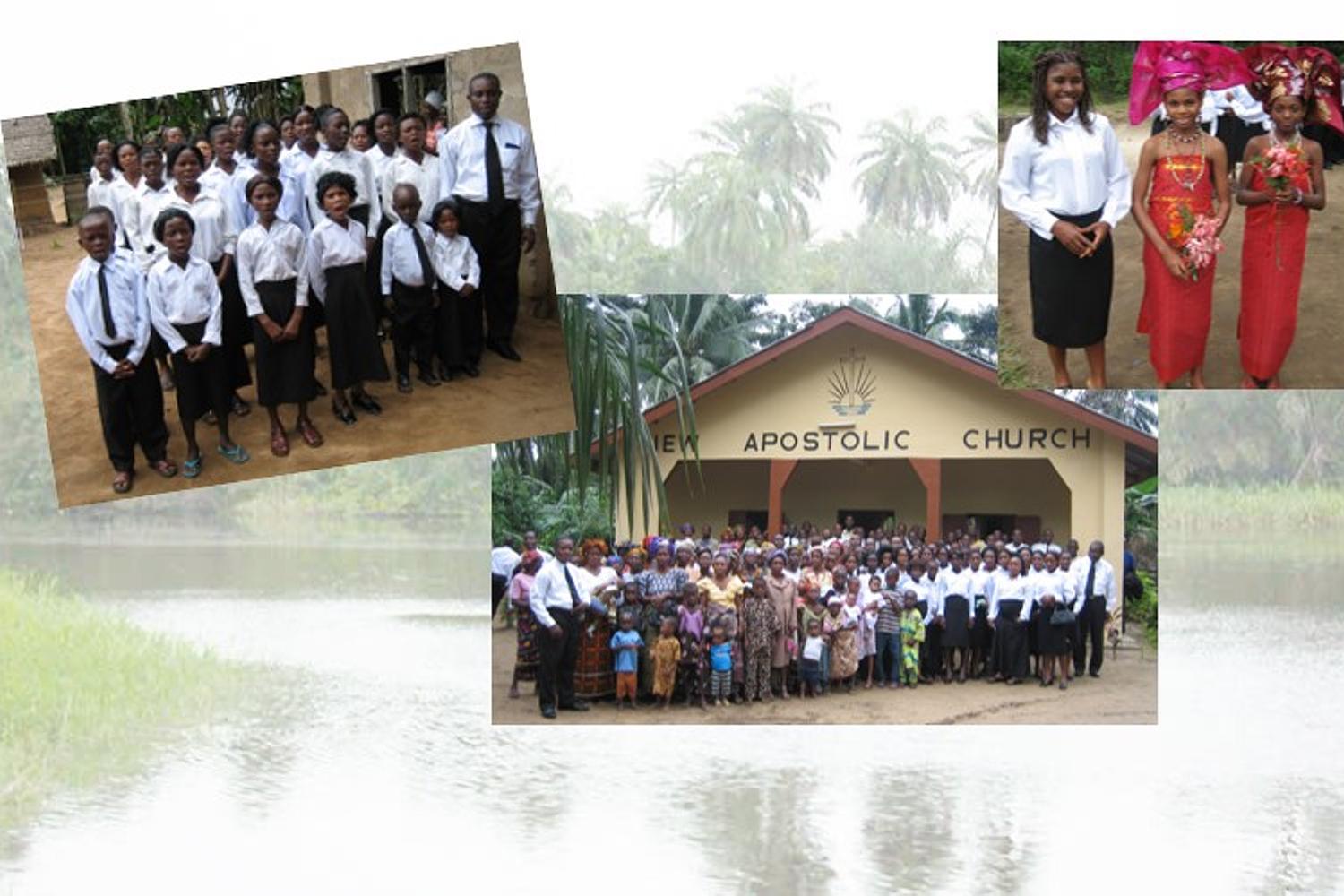 Children and youth contributing for further growth of the work. 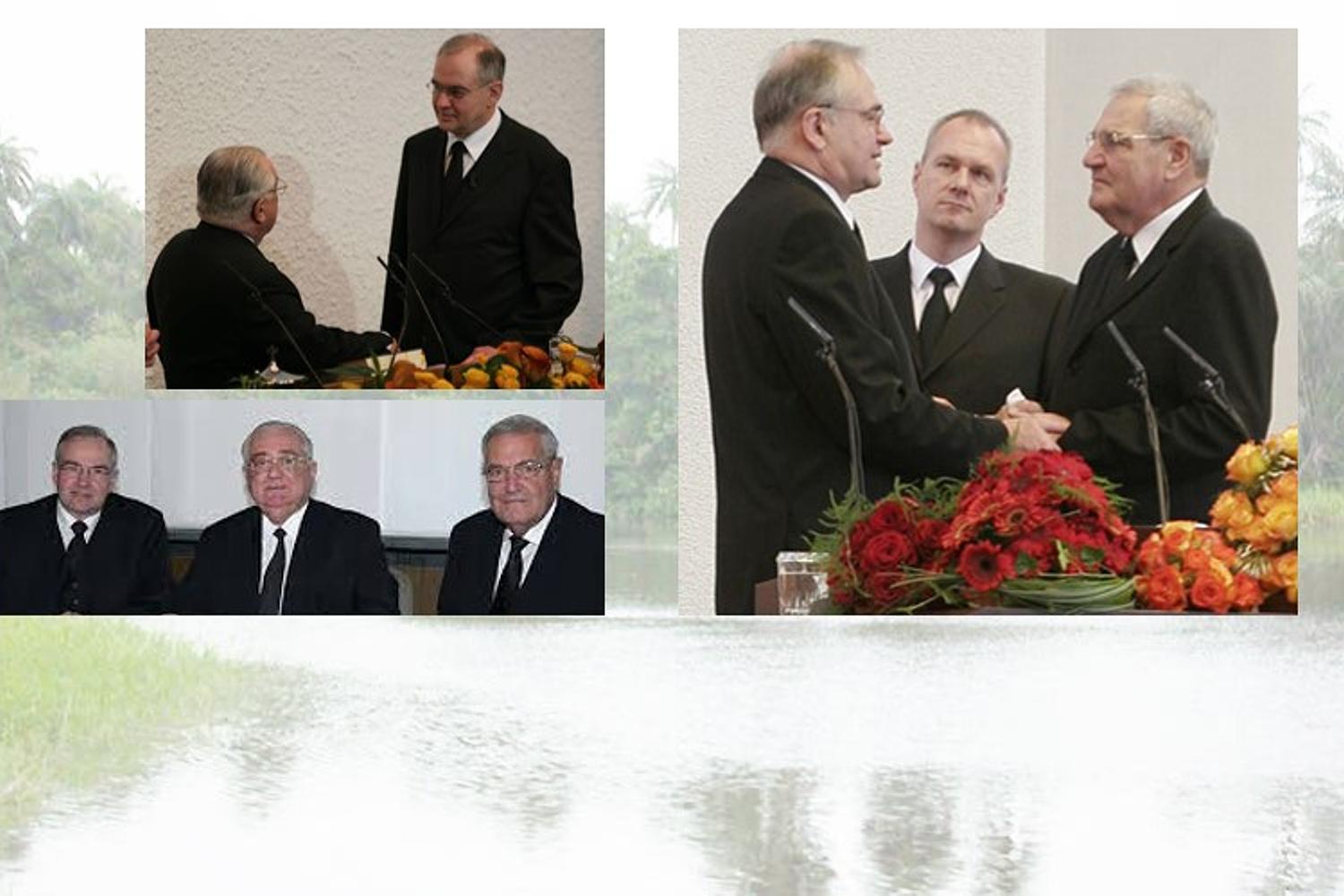 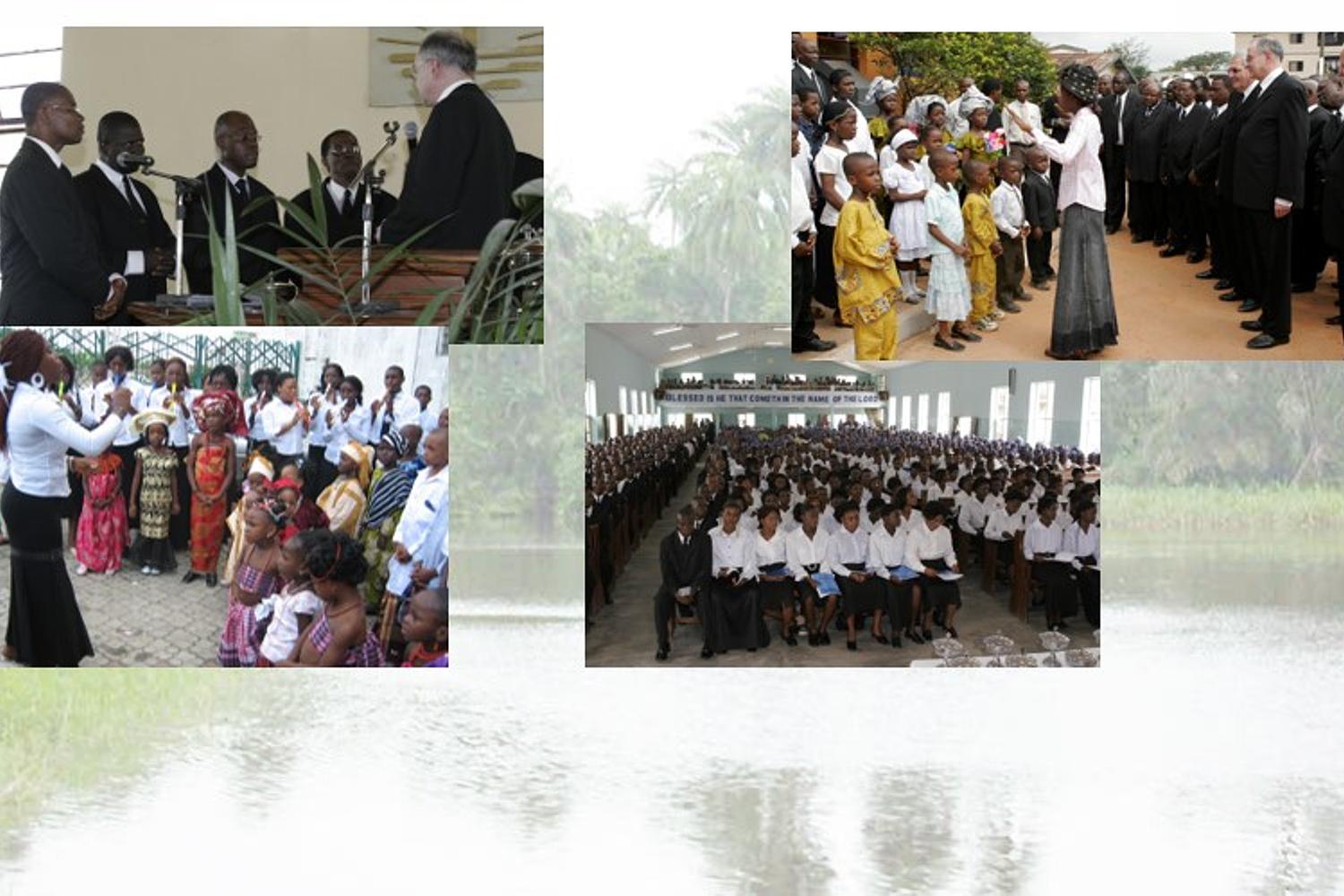 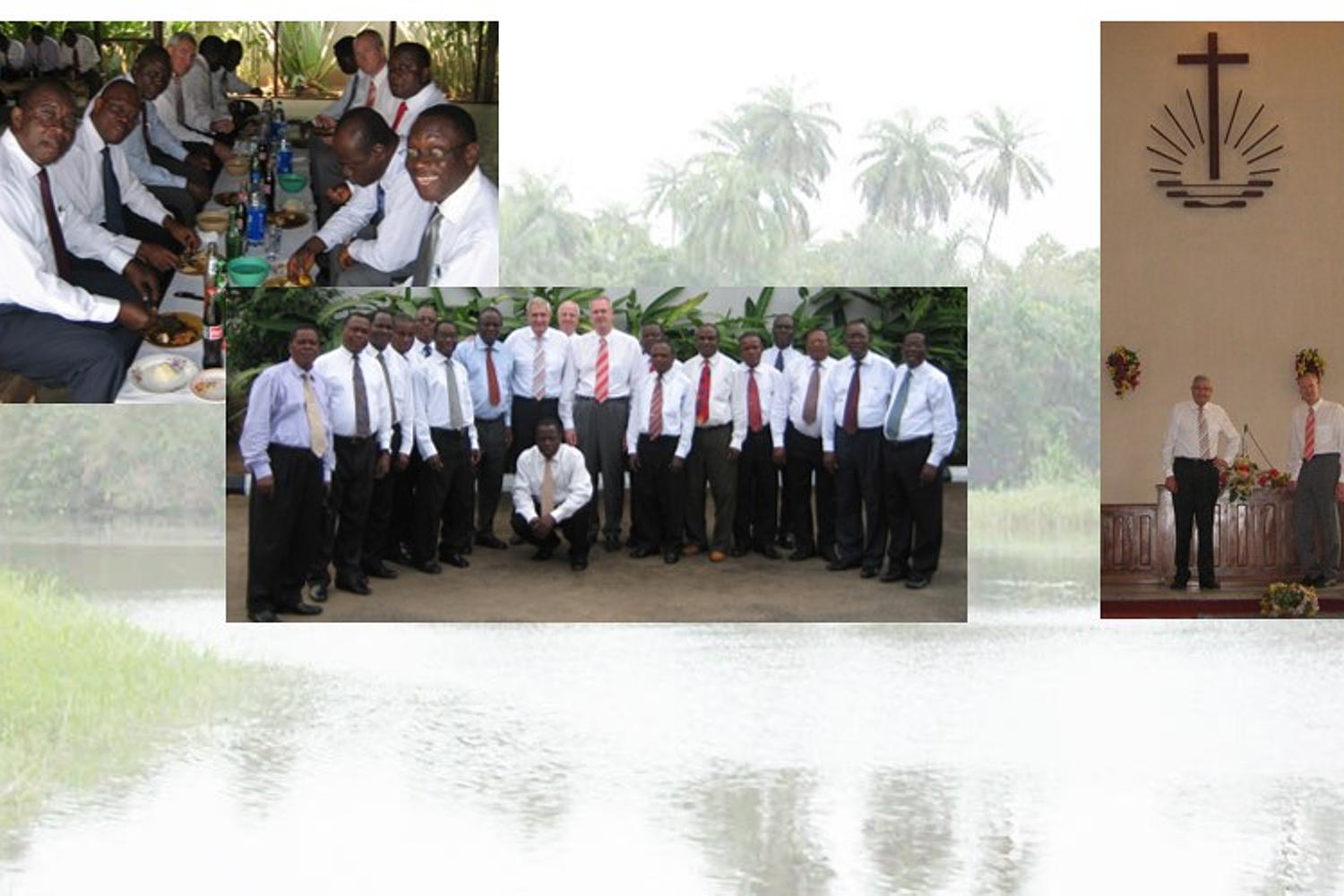 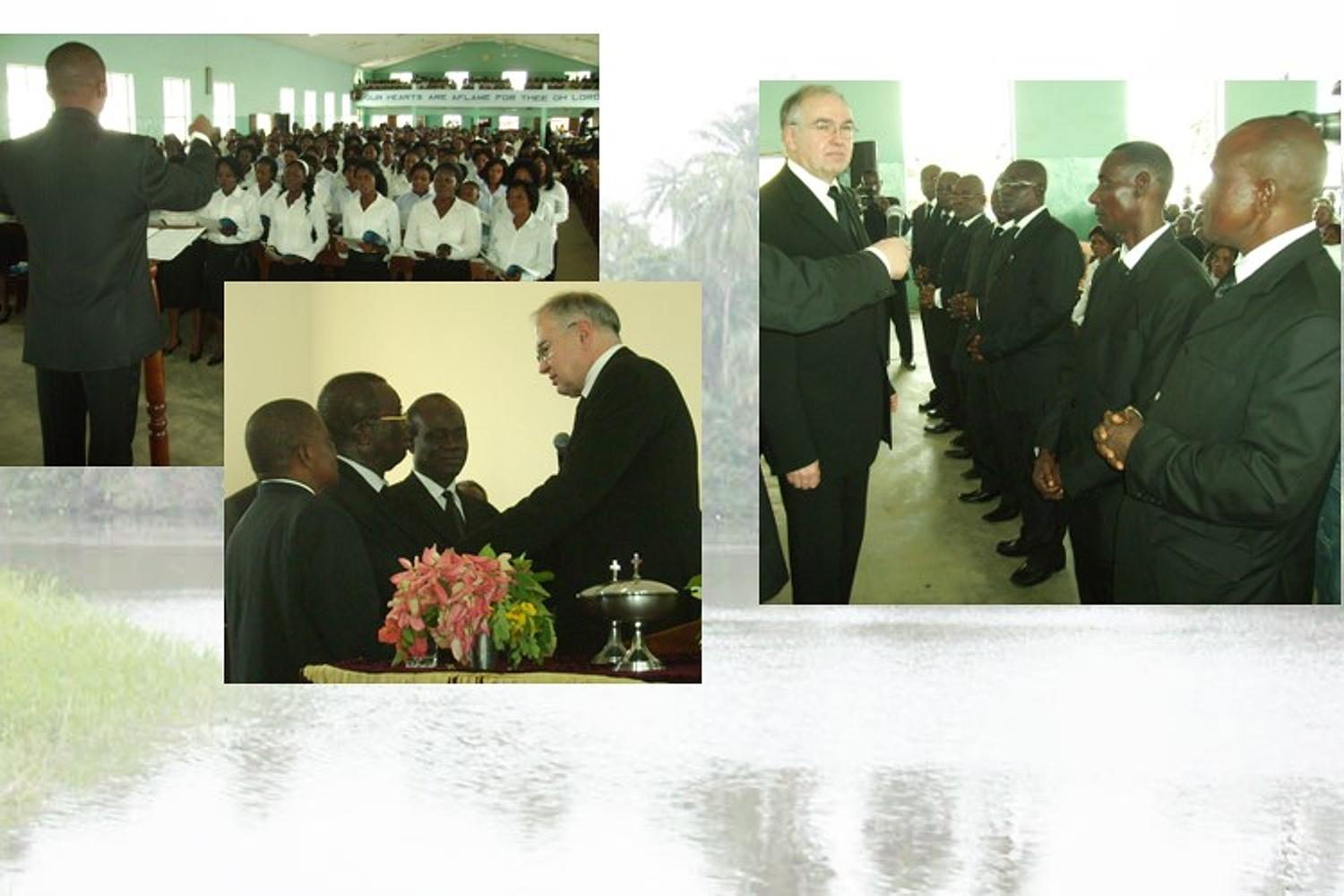 The decade of stabilization ↑

For the first time in the history of the NAC, District Apostle Michael Ehrich invites all district ministers to Lagos for a special Divine service (with ordinations) on Saturday and the Divine service for the departed on Sunday, November 6/7, 2010. 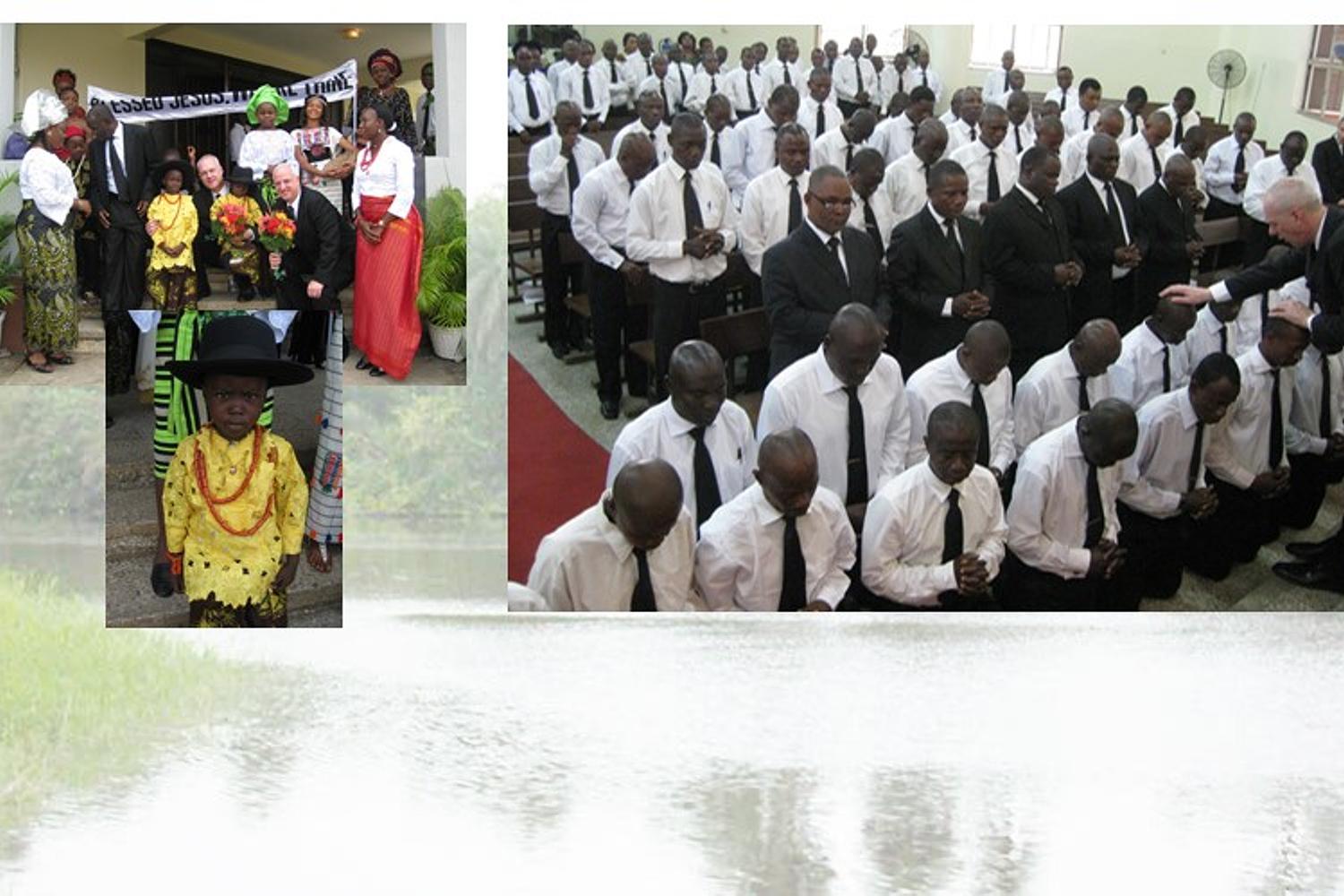 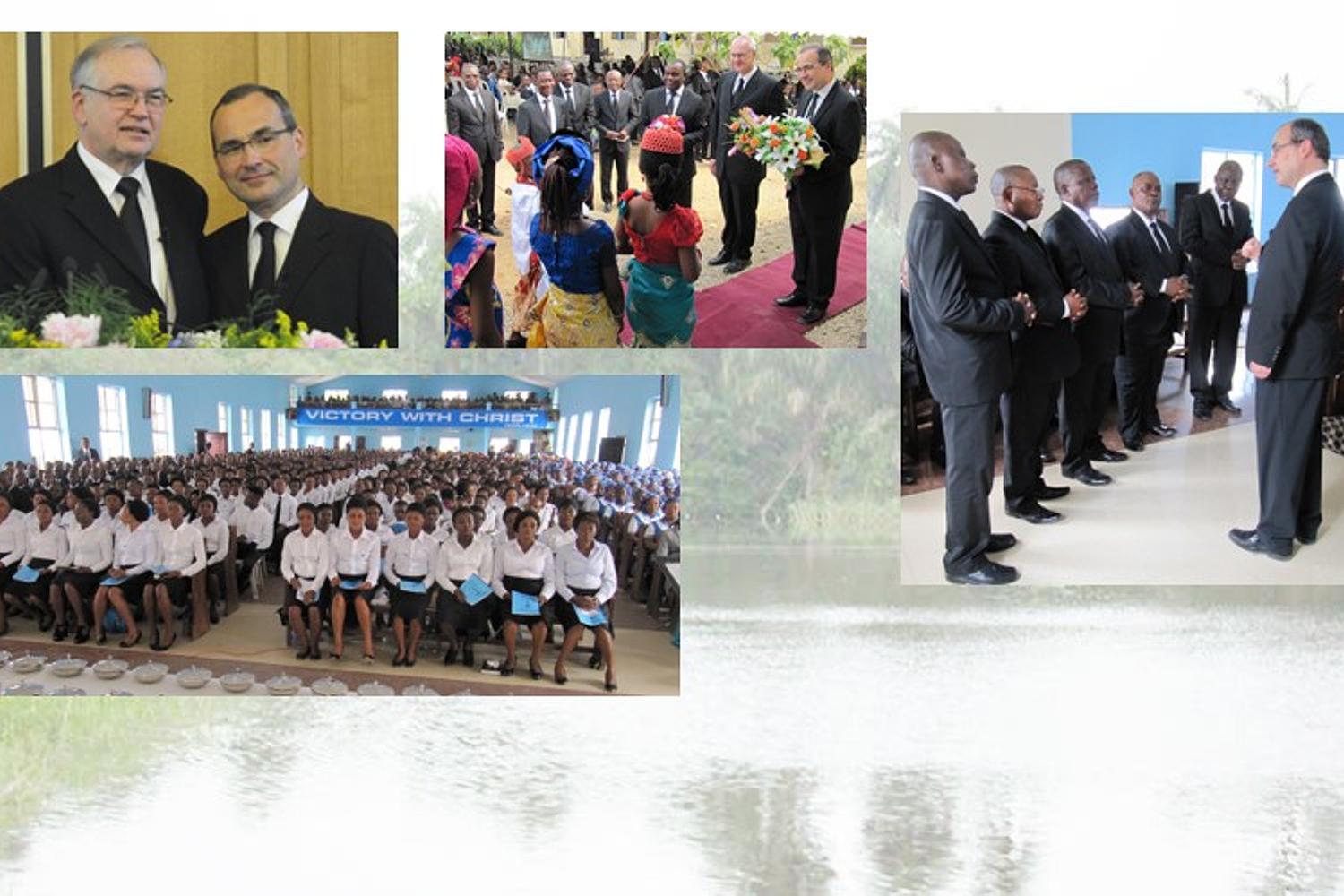 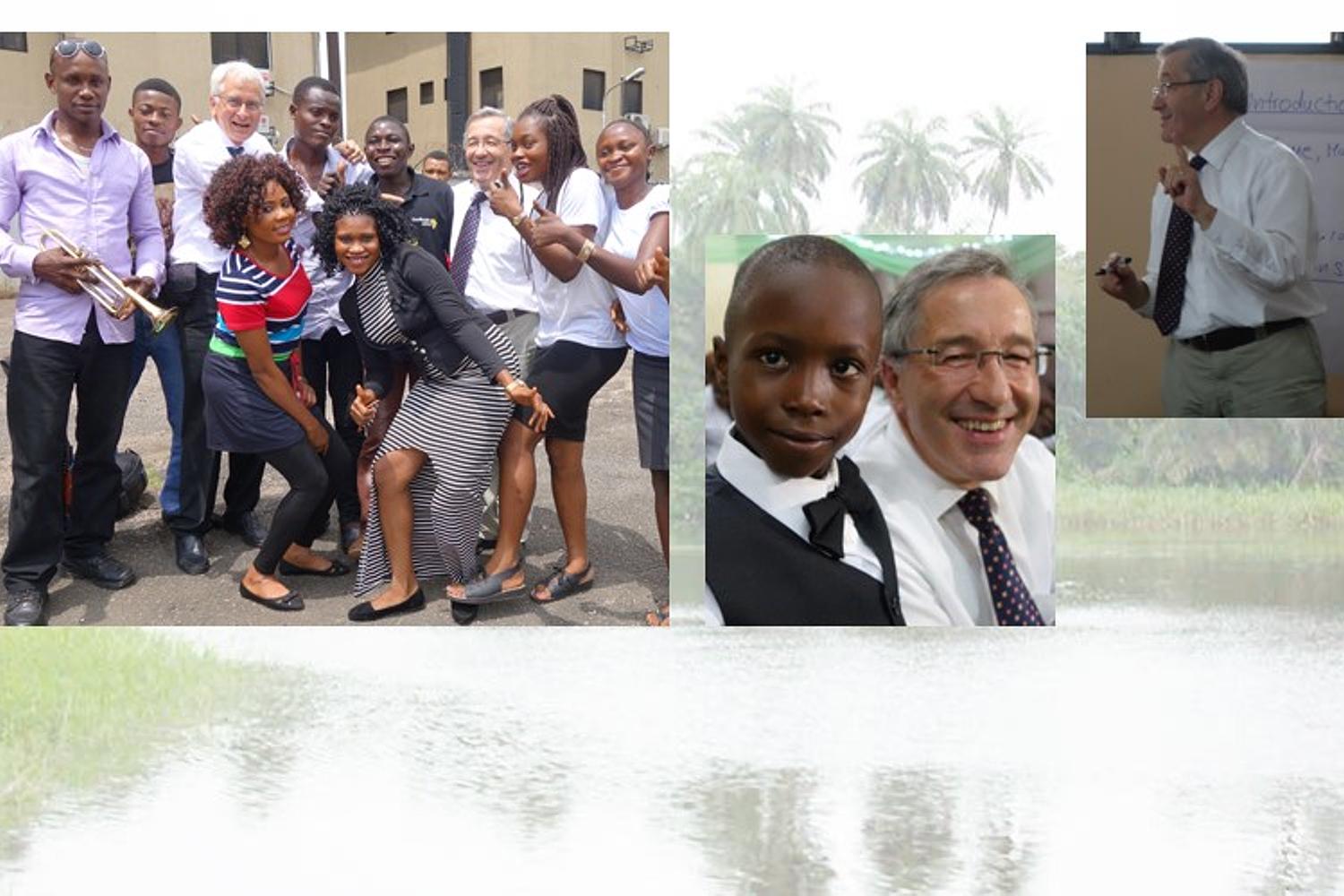 In November 2016, District Apostle Michael Ehrich conducts the Divine Service for the departed in presence of all Apostles and Bishops from Nigeria, Cameroon and Equatorial Guinea in Abuja. Apostle Volker Kühnle -after 17 years of working in Nigeria- is discharged as lead Apostle for Nigeria, Apostle Geoffrey Nwogu is commissioned as new lead Apostle for the country. 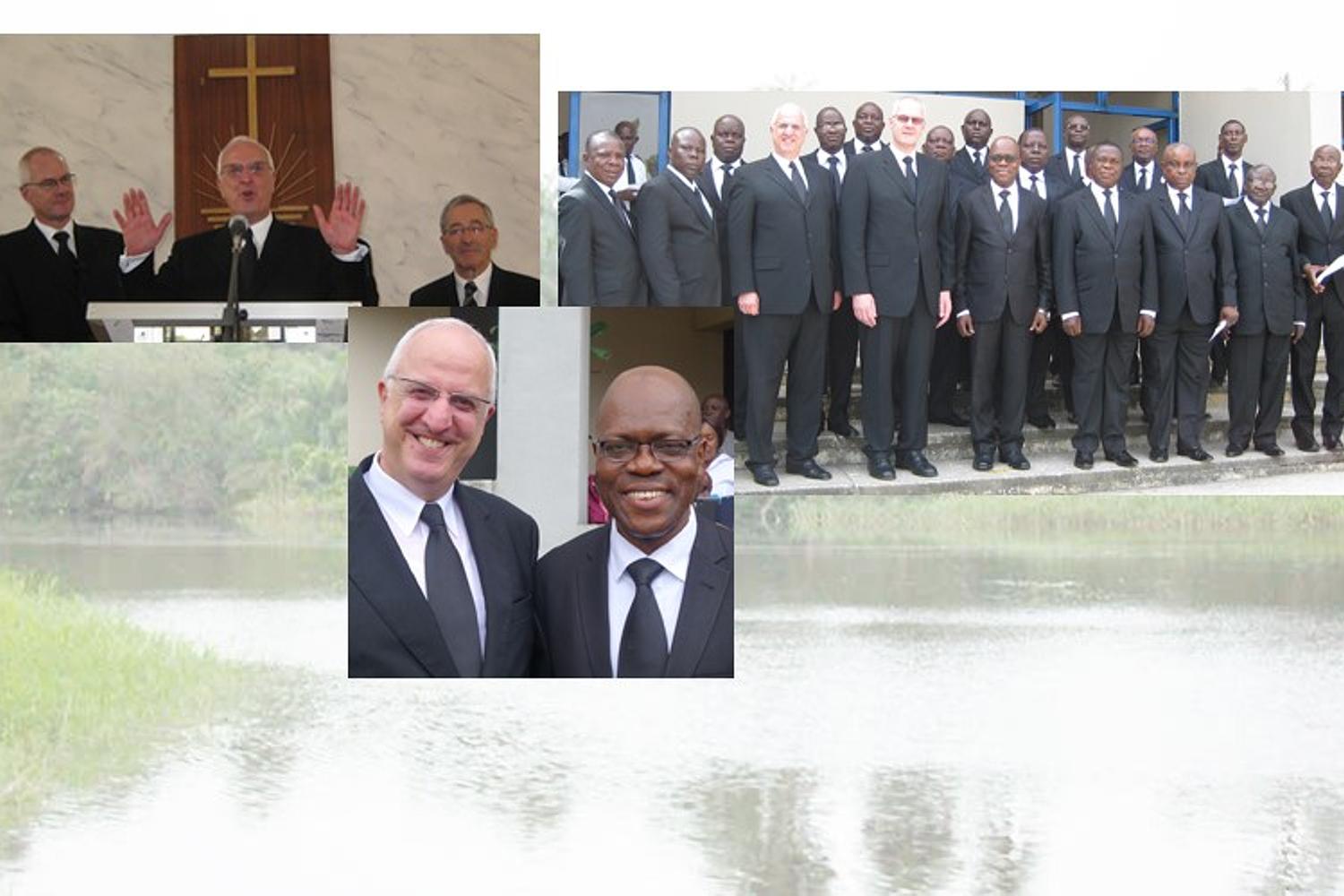 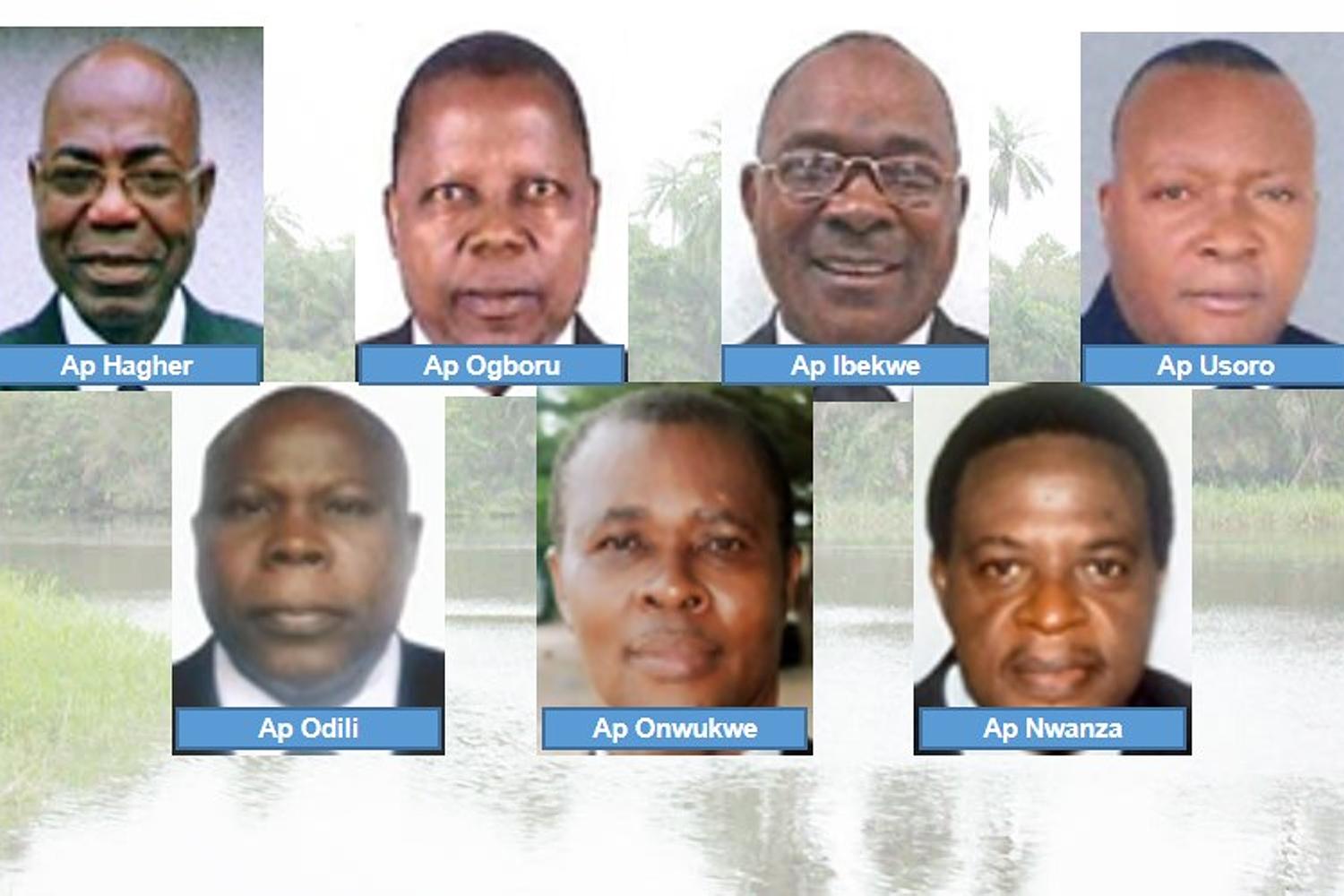 In this decade, 7 apostles more are ordained for the further stabilization of the work.

On Sunday, March 24, 2019, District Apostle M. Ehrich dispenses in a festive Divine service in Abuja – in presence of all Nigerian Apostles and Bishops as well as Apostle Volker Kühnle- the Silver wedding blessing to lead Apostle Geoffrey Nwogu and wife. 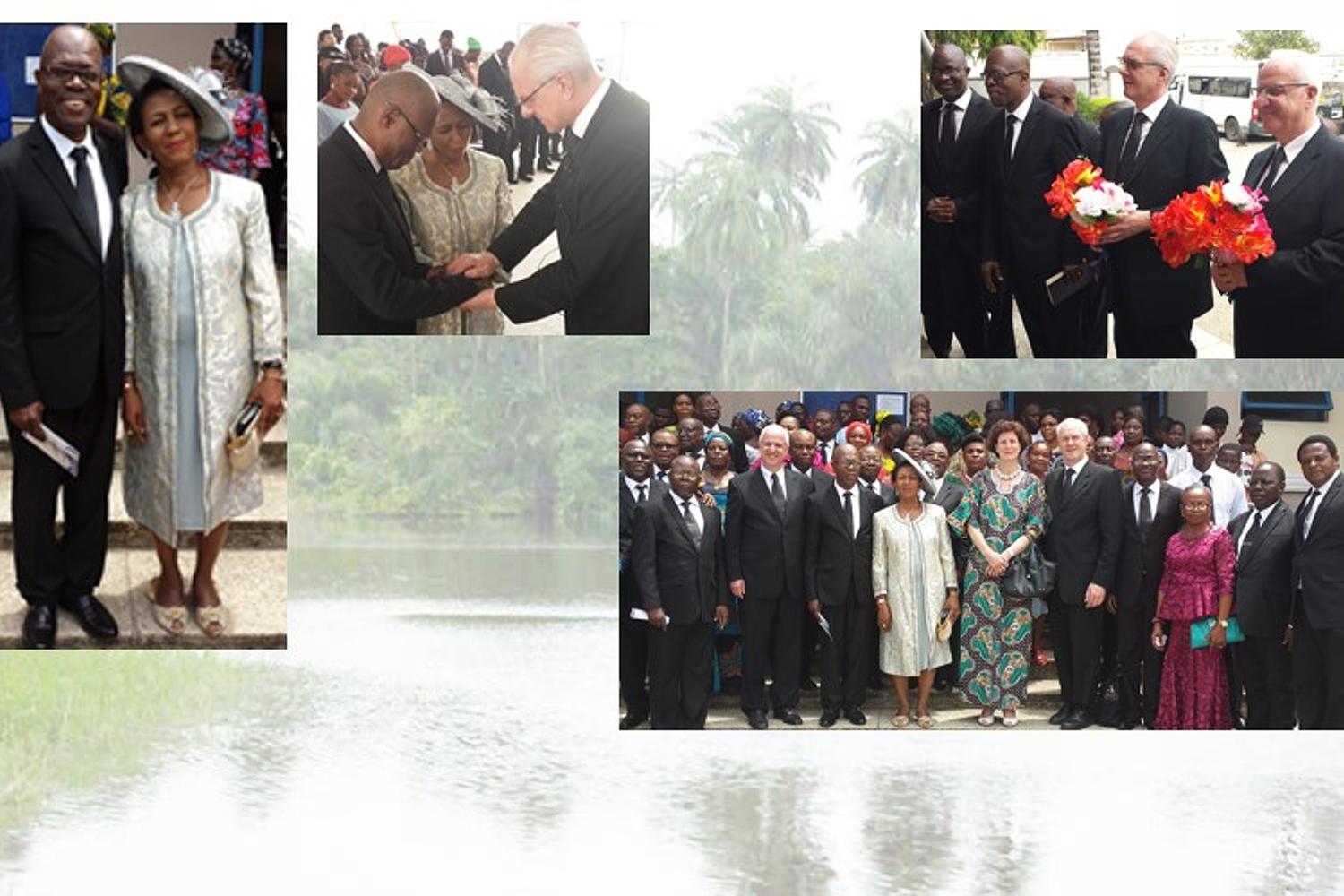